We are now in 2019 in the deep depths of the digital age. Inspirations – particularly travel inspirations – no longer come from childhood dreams or something you saw on Getaway one Friday night… Now, it’s Instagram.

We’ve found the social media platform to be extremely helpful in finding our next destinations and through all the filters and editing, there is still an image of a place that gets you excited to explore our great land. One of these for us, was an image derived from a small island off the coast of Perth where you could find a cute little marsupial with a sweet smile on its face – thus, the perfect selfie buddy. I’m of course, talking about the quokkas on Rottnest Island.

I’m the first to admit that it was these fluffy little fellas that encouraged us to look into venturing offshore to this somewhat mysterious paradise. All we knew, was that Rottnest was just a beautiful-looking island inhabited by little quokkas just dying to get a photo with you.

We’re suckers for any kind of animal or natural phenomenon, so we jumped at the chance to get over to the island for our own look.

Along with being breathtakingly beautiful, it was abundant with wildlife and native flora. A landscape untouched by the spoils of modern-day society and while this place was absolutely teaming with people, there was still a peaceful aura to the place – like a gentle calmness washed over you as you stepped off the boat.

Now I might shock a lot of you here, but guess what… Instagram isn’t always truth. Shock, horror, right? An image can inspire and generate feelings of love, lust, inspiration…. But often, there’s far more to any one picture you see, and while we all know it, we often forget. Sometimes it’s not a true depiction of reality, and for us, this was exactly the case for the quokka and what’s now famously known as the ‘quokka selfie’.

Don’t get me wrong, we were absolutely successful in conquering our quest for a photo with one of these gorgeous little creatures, but it’s not as simple as it looks – and there’s a few things you need to know before you go quokka hunting. So, before you venture over to this fascinating piece of Australia, here are some tips to catching that quokka grin.

They’re friendly, but not THAT friendly

Online, quokkas are made out to be the best mate you never had – the fella who’d laugh at your jokes and sit still while you prance around with your iphone trying to get the ideal snap, but it might surprise you that these little guys are still wild animals and get startled like any other would. Sure, they are happy to be fed and are happy to have a sniff around the township while you’re having a beer or nibbling on pastries from the bakery, but they are still wild and not as tame as Instagram makes you think. They hop away when they feel uncomfortable – so don’t startle them. Move slowly and gently. 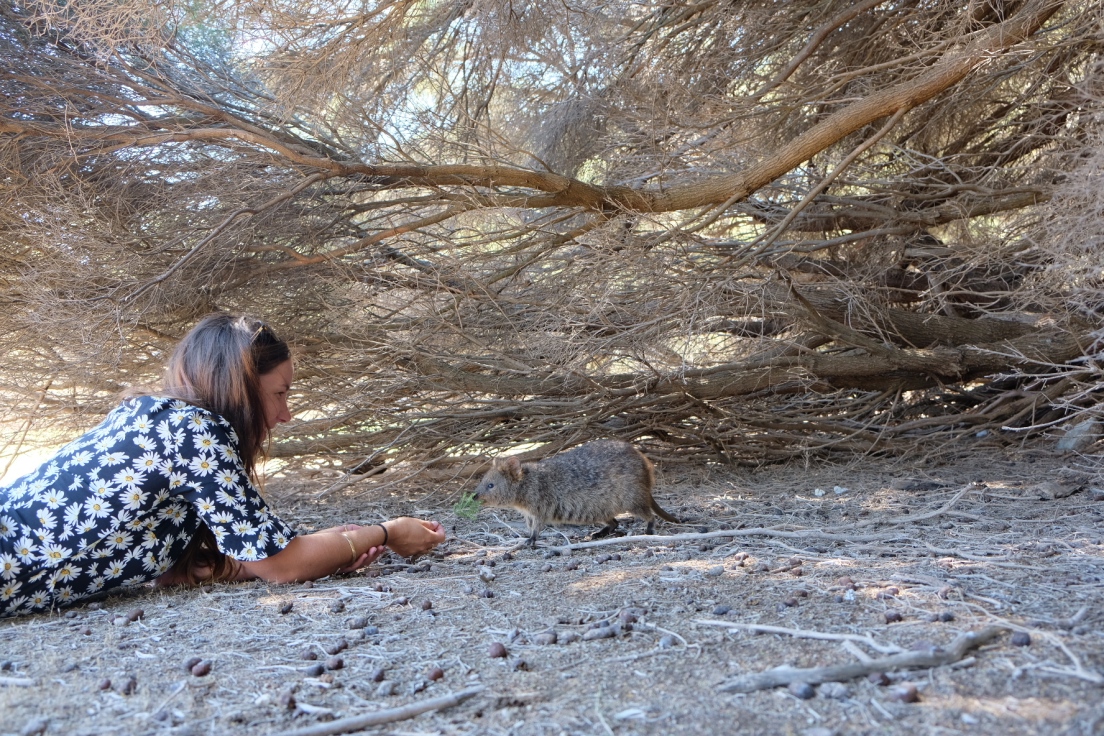 NEVER touch them or feed them human food

This may seem like a no-brainer but even in the few hours we spent on the island, we were shocked by the amount of tourists trying to coax them over using human food. They’re not afraid of you and they’ve got zero predators so of course they’d have a nibble of your sanga, but it does make them sick. Our tour guide told us the ones hanging around the township are quite unhealthy because of the amount of human food they consume. Their little bodies can’t handle it and they end up very unwell. She also told us they can carry salmonella so just don’t go there. Look, smile, but don’t touch. 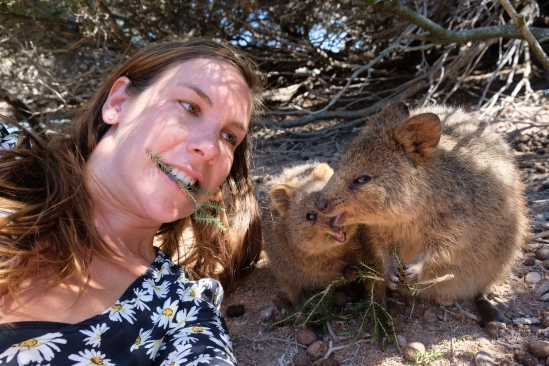 These little cuties can only grow up to 40-50cms tall. They are super tiny, and like to hide in the trees out of the sun during the day. They don’t walk around in broad daylight waiting for your pic, who would? Instead, you’ll find them snoozing under trees and shrubs waiting for the cool evening air before heading out. This means, you’re going to have to get down to their level for a photo and perhaps have to crawl or lie down (depending on your level of commitment). We found ourselves crawling through a whole lot of quokka poo just to get close to one of these little critters – so maybe don’t wear white either 😉 Oh, and avoid going too close to the road – the bus drivers have to stop and wait for you so best just steer clear and use common sense.

You might have seen Hollywood heartthrob Chris Hemsworth getting his own quokka selfie recently – notice he had a little bit of greenery to coax them over? This happens to be a plant which grows all over the island and a favourite for the quokkas. We simply picked some from an area they couldn’t reach themselves and used that to coax them over. Turns out they were more than thankful for a snack from higher up (they can’t climb either). From there, it was a lot of patience and gentle caution as the quokkas came over for a nibble and sat for just long enough to snag a snap. Success!

Remove the guesswork and pay for a tour

When planning our trip, we considered catching the ferry over and just hiring bikes for the day – self-navigating our way around the island. Lordy, I am so glad we chose to go on a tour instead! It happened to be a super hot day and neither of us were in the mood for cycling our way around the hilly somewhat shade-less landscape, so the 90 minute Rottnest Express bus tour was perfect as an introduction to the island. The guide was super informative and explained a lot about the island’s rich history as a military base and wildlife sanctuary. Did you know the island is named ‘Rottnest’ because back in the day dutch explorers described it as a ‘rats’ nest’ (which of course turned out to be the quokkas) Rottnest/ rats nest? Seriously, no one thought of anything better? 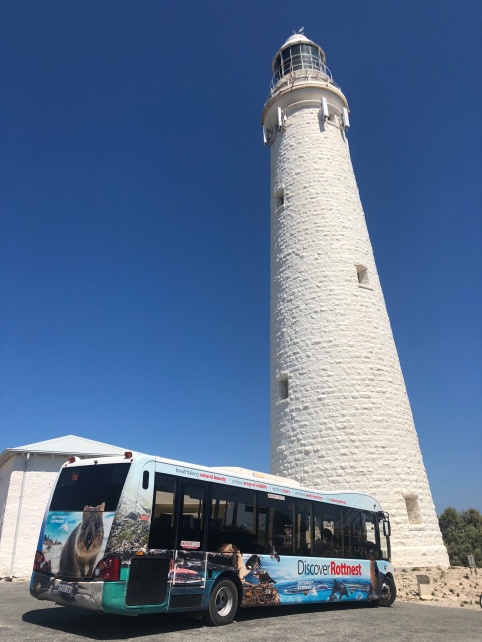 We were shown right around the island – where the best snorkeling and swim spots are, best places to eat and relax, and she also pointed out the best places for quokka spotting – reiterating the importance of caring for these little guys while you go about getting Insta likes. I was grateful for this – we saw heaps of people just riding around aimlessly looking for these little guys, or settling to snap the ones around the cafes.

All up, the day cost Ben and I just under $200. Yeah, it’s not a cheap day and while we really enjoyed our time, we would have loved a night on the island to truly experience this piece of paradise. The price included a return ferry from Fremantle and the bus tour. The tours are absolutely well worth it if you’ve got the coin, but there are also heaps of volunteers on the island to answer all your questions as you move around.

So there you have it – a quick guide to scoring a quokka snap safely and successfully. I shouldn’t have to say it, but while these guys are a huge tourism drawcard, the island stands proudly on its own and if you’re after a day of turquoise blue water, white sand, picturesque shorelines, colourful reefs and a relaxed island atmosphere, then Rottnest or ‘Rotto’ isn’t one to miss.

One final tip, check out the trees and shrubs around the golf course for furry friends 😉 They truly are wonderful.

A lover of the written word.

Journalist by trade, writer by hobby. Writing fuels my soul and I promised myself I’d string words together more often, so here I am.

A collection of pieces that describe the inner workings of my mind.